Jen Welter hired by Cardinals; believed to be first female coach in NFL

TEMPE, Ariz. -- In March, Arizona Cardinals coach Bruce Arians was asked when the NFL would have a female coach.

The answer was Monday.

The Cardinals hired Jen Welter as an assistant coaching intern for training camp and the preseason to work with inside linebackers. She is believed to be the first female coach of any kind in the NFL.

"Someone asked me yesterday, 'When are we going to have female coaches?'" Arians said. "The minute they can prove they can make a player better, they'll be hired."

425 people are talking about this

Welter played professional football for more than 14 years as a linebacker, mostly with the Dallas Diamonds of the Women's Football Alliance. She helped lead them to four championships.

A news conference is scheduled for Tuesday.

Speaking to azcardinals.com on Monday, Arians said: "Coaching is nothing more than teaching. One thing I have learned from players is 'How are you going to make me better? If you can make me better, I don't care if you're the Green Hornet, I'll listen.'"

"I really believe she'll have a great opportunity with this internship through training camp to open some doors for her,'' Arians said.

It's the second such barrier to be broken in the NFL this year. The league announced in April that Sarah Thomas would be the first woman to be a full-time NFL official.

VP Biden (Archived)✔@VP44Breaking barriers and reaching new heights. Congratulations to Jen Welter. This is what progress looks like. https://twitter.com/jwelter47/status/625824596772532225 … Dr. Jen Welter✔@jwelter47Thank you @AZCardinals & @BruceArians & everyone here in #Phoenix. I am honored to join this amazing #footballfamily 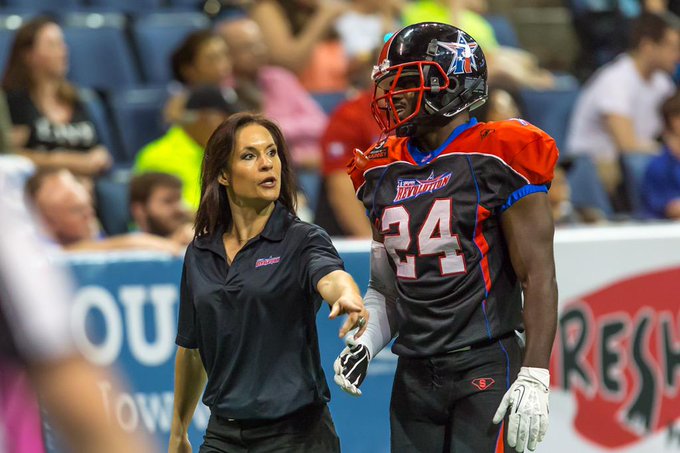 470 people are talking about this

Information from The Associated Press contributed to this report.