Jen Welter is back coaching on the sidelines in 2019. This time, the first woman to coach in the NFL is with the Alliance of American Football in a full-time role, as a defensive specialist for the Atlanta Legends. Welter is one of three coaches who are women in the newly formed AAF, along with the Birmingham Iron’s Lo Locust and the Arizona Hotshots’ Jennifer King.

Before the new league kicked off on Feb. 9, I spoke with Welter about what it means to be a woman coaching football. I also talked to AAF’s Hines Ward and Charlie Ebersol, along with NFL head coach Bruce Arians, about pushing diversity across the sport.

“For me in this process, I tell people all the time ‘it’s not enough to have it just be you,’” Welter says. “That’s selfish, if it was just them coaching football and there were no implications for anyone else. To me, that’s not enough.

“And so to hear about the other women at AAF who are doing a great job who are there in the trenches, it shows progress. And it encourages me to continue to not only kick butt on the field but to push for change in our society as a whole.”

While the AAF wants to be viewed as a complement to the NFL, the league’s founders are committed to pushing the boundaries when it comes to diversity within the sport.

The league was founded by television producer Charlie Ebersol and longtime NFL executive Bill Polian. Aside from being a developmental league that serves as a complement to the NFL, part of Ebersol’s goal for the AAF involves promoting diversity, which includes employing coaches who are women.

“As we look at having not only diverse coaches as in minorities, but looking at women and saying, ‘how do we create an environment so organic to football that it’s going to promote quality football, but at the same time move the conversation forward?’” Ebersol says of his vision for the AAF. “And you can’t get much better than Jennifer [King], and Jen, and Lo. We couldn’t be prouder of who they are and what they’ve accomplished even in this short period of time.”

One of the people he put in charge of just that was former Pittsburgh Steelers wide receiver Hines Ward, who’s the head of football development for the league.

“Having played football my whole life I’ve never been coached by a female,” Ward tells SB Nation. “So I was super excited to be able to sit down on the phone and just chat it up and talk football with some of our female coaches that we have in our league now.

“It was new, it was exciting for me, and I just thought it was a great opportunity to be helping that progression.”

Ebersol had known Welter for years before he founded the AAF.

“One of the things that was remarkable to me — there was a skirmish during a scrimmage,” Ebersol said of Welter. “And the coach that was in the middle of it, like, ripping these linemen apart and pushing them apart is Jen Welter [with laugh]. If that doesn’t define what she is all about, I really don’t know what does.”

Welter adds that the AAF employing women from the get-go is another sign of progress being made within the sport.

“It’s wonderful to me to see that change,” Welter says. “And to see it being part of the fabric that the Alliance Football League is all about from Year One.”

Welter’s name is pretty well known now, but it took years of hard work and breaking both barriers and stereotypes to get where she is today.

After playing rugby at Boston College, she played and coached football professionally for years. She won a gold medal in 2010 and 2013 with Team USA at the IFAF Women’s World Championship, and played and coached men’s indoor football with the Texas Revolution. In the summer of 2015, former Cardinals head coach Bruce Arians brought Welter on as an intern for five weeks to coach linebackers through training camp and the preseason.

“I was excited to have Dr. Jen Welter join my staff as the first female NFL coach for our 2015 training camp,” Arians, who now is the Buccaneers head coach, told SB Nation. “She was more than qualified, having played for more than 12 years.

“She brought a totally different way and ideology of how to coach players and did a heck of a job with our inside linebackers. She particularly did a great job assisting Larry Foote, who was a first-time linebackers coach on my staff. Larry worked very well with her and the players accepted her right away. She had a great knack for teaching and getting her point across in a way that really connected with the players.” 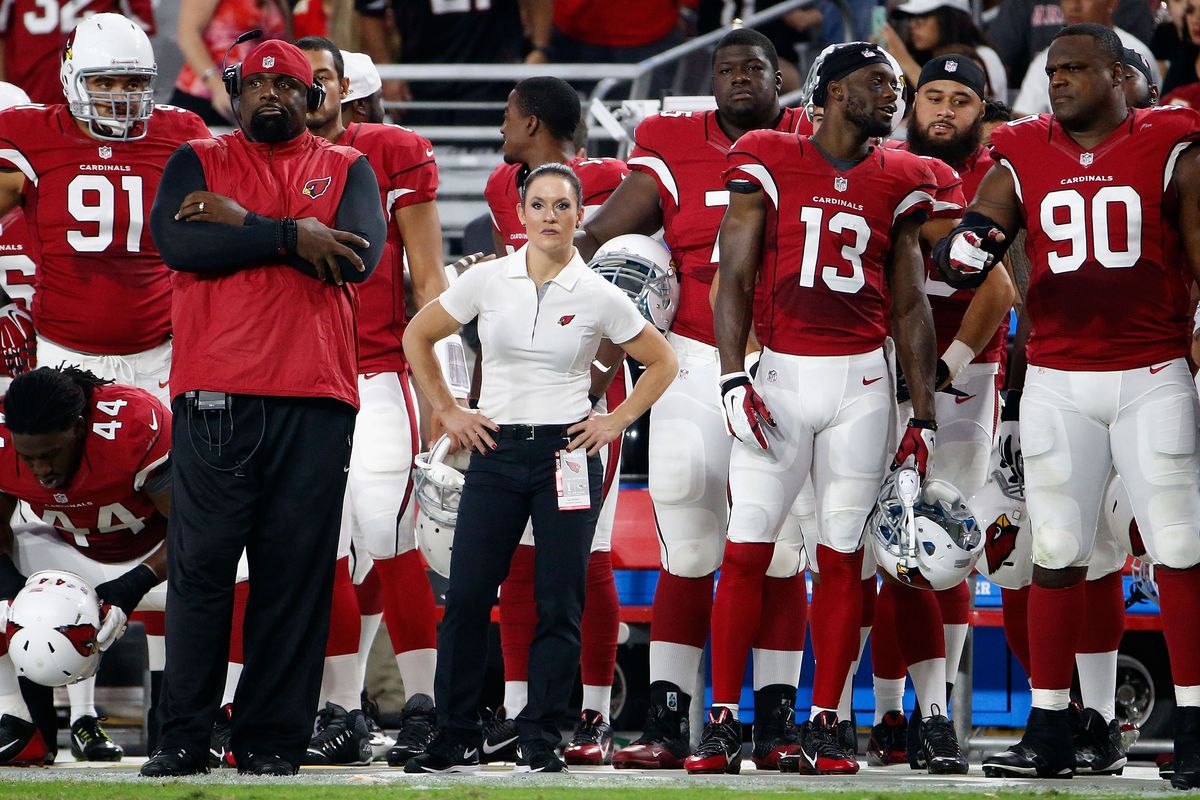 Welter calls her time with the Cardinals “one of the coolest times of her life,” and credits both Arians and Foote for setting the tone with how she was received on staff.

But being the first woman to coach in the NFL didn’t come without some learning experiences along the way.

“They didn’t have shorts that fit me,” Welter says lightly looking back at her time with Arizona. “They hadn’t thought about it because they never had a 5’2, 135-pound person, regardless of male or female, before. So my attitude was if the worst challenge we have being the first female in the NFL is some big red shorts, give me those big red shorts.” 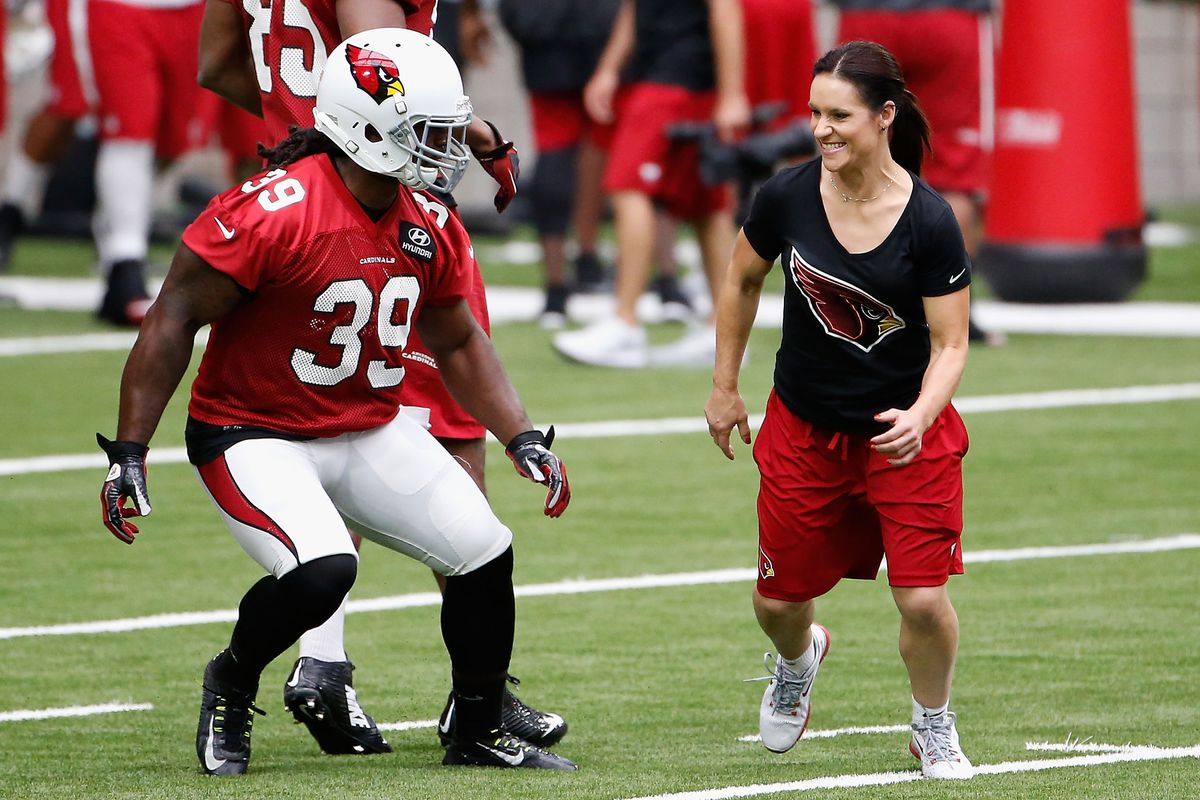 As far as coaching men goes, Welter says one of the keys is to have fun with players who are adjusting to being coached by a woman for the first time.

“My approach was always to laugh a lot,” Welter says. “For example, here we are the linebackers, who are some of the roughest, toughest guys, and being a little bit crazy is part of what makes them great. I know I was one, trust me. If they lost that, because they weren’t comfortable with me, that would be terrible. So I always used to lead with humor in ways that I knew would alleviate any tension to let them know that they could joke with me by joking with them first.”

While the internship gave Welter massive public exposure both for herself and for other women looking into getting involved with coaching, Welter adds it was important to keep progress moving forward, even as she was the first.

Since Welter’s time with the Cardinals, the San Fransisco 49ers hired Katie Sowers, who interned with head coach Kyle Shanahan when he was at the Atlanta Falcons, in 2017. Kathryn Smith served as a quality control coach for the Buffalo Bills’ special teams in 2016, King was a coaching intern for the Panthers during the summer of 2018, and Kelsey Martinez was hired a strength and conditioning coach for the Raiders in 2018. Phoebe Schecter has had coaching internships with the Bills for two seasons, and Sarah Thomas has been an NFL referee since 2015.

“What was challenging for women in football at that time, we couldn’t look at football and say ‘this is where my career is’ or ‘I wanna be the first female coach in the NFL’ or at least I didn’t because there was no one I could look at and say ‘I wanna be her’ from a coaching perspective,” Welter says.

“So the thing that kind of drives me and excites me about that is once it’s been done, it can’t be undone. And it makes it possible for anybody who loves football as a female to look at that football field and say ‘you know I could be her’ or be there just like it does with Sarah Thomas, or anything that kind of changes the culture.” 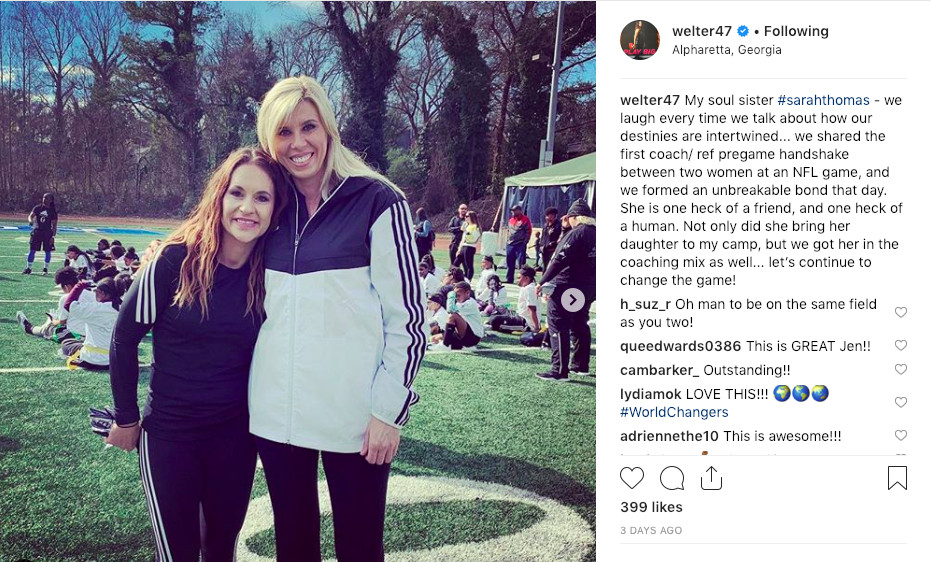 “To me, that was very exciting and also to know, and I always say this, the responsibility of the first is to make sure you’re not the last,” Welter says. “So you, number one, have to do a good job so that they continue to see that it can work, and there can continue to be opportunities.”

Welter, who just signed a multi-year partnership with Adidas and has launched her own football cleat, is hopeful that fans seeing more women coaching football this spring during AAF games will promote a cultural shift, too.

“But also it needs to be visible and talked about,” Welter continues. “So that for example, something like the AAF when they’re starting out, that was something that was important to have women involved. And it changes culture from a learning perspective.”

Thanks to the trail Welter has blazed, she’s lived up to one of her slogans and has helped “kick glass” for other women like her.